Obviously I'm not going to be able to recreate all of Glitch in its entirety; the game world was MASSIVE, ecologically and artistically diverse, and some aspects of it, unfortunately, were not preserved in an easily accessible format. Here's an incomplete fan rendering of the world map by user acreditando, made by pasting region maps together. Click for full size. 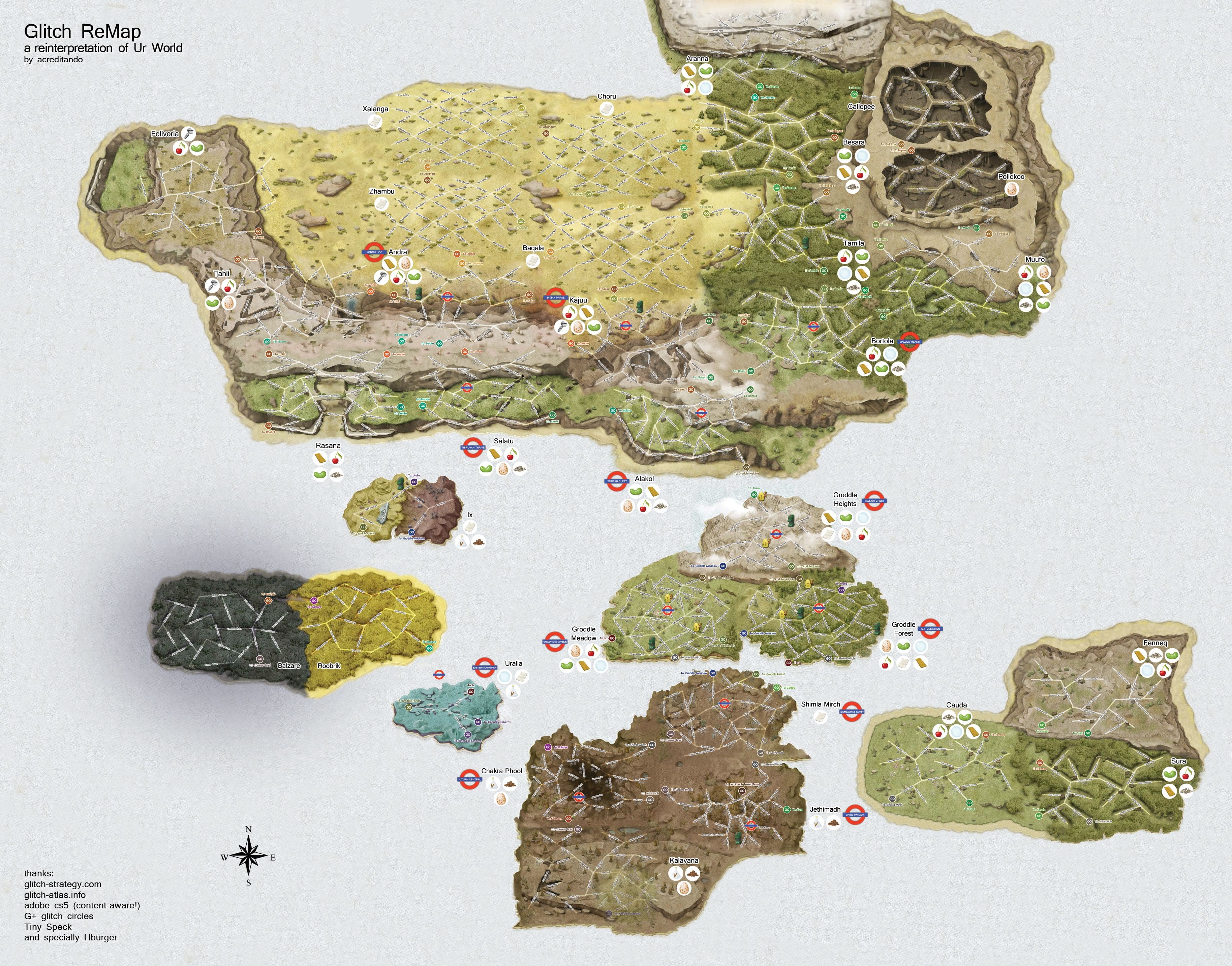 That's not even counting the world map regions added close to the game's shutdown, such as the meditative underwater regions of Jal and Samudra, and the snowy, haunting regions Nottis and Drifa, OR the various quest, minigame, party, and other secret areas, which were never represented on the world or region maps. They even added a showcase area called the Vortex of Random to demonstrate ideas they'd had that never made it into formal game lore, but were polished enough to explore in part.

Like, I COULD theoretically try to make my island shaped like the in-game world map (which I have saved to my computer somewhere—I'll need to find it), or represent every single region equally, but I don't want to do that. After all, I've already linked to all the game assets and multiple remake projects if you just want a 1:1 recreation, or as close as anyone can get. Striving for that in ACNH just isn't functional.

So I'm going to be showcasing the things that stuck with me that I'm able to recreate, and do that as best I can. Some will be more difficult than others due to technical constraints, such as, in no particular order:

Pictures will be added when I take/find them and remember to upload them.

This region is kind of hard for me to design, honestly—it looks too much like Animal Crossing. Or, well, almost. The visual differences are things like floating dirt clods with flowers growing out of them, and I have no idea how I'd show that. If I could have three or four different types of flowering bush at once, I could really sell it, but that's not happening without hacking (which I don't want to do and also literally can't[note 1]).

One thing in Groddle I was confident about designing was the Enchanted Woods area, which is a tree so large it has trees growing inside it on mushroom shelves. I plan to add some mushroomy elements (no plantable mushroom shelves, alas) and perhaps expand it, but I think the base design is a fun concept.

Ix is named after a planet in Dune, and just like its literary origins, spice features heavily. Spice and gas plants cover the island, which is split into day and night halves. It's sparse, but the features it does have are jaunty and often geometrically complex.

In its original form, Ix and Groddle are separated by a physical drop, so Groddle has a street called The Great Hole to Ix and Ix has a corresponding Groddle Ladder. This is interesting, because they're treated as separate landmasses—perhaps there's a wormhole? Anyway, I used an incline to represent this, in the color that most closely resembled the giant staircase in Guillermo Gamera Way.

Ix has non-functional background buildings (rare for Glitch, where almost every building either is or was once navigable), which I've represented with dollhouses and doghouses. It also has two storekeepers, Helga and Uncle Friendly, who I've represented by the Able Sisters and Nook's Cranny respectively.

Fun fact: in actual Glitch, the day and night halves are west and east respectively, while on my island they're east and west. This is because I remembered that West Spice is one of the streets in the night zone... and forgot that East Spice is in the night zone, too. At this point, I like how it looks and don't want to change it.

Obviously, I couldn't name my island after a region of Glitch without including its namesake! Uralia is a whimsical mountainous woodland island full of fantastical flora, fauna, and fungi! All the street names are Russian-themed in honor of (or because they were named by?) its Russian designer. This site's favicon is a cubimal (in-game wind-up toy) depiction of an Uralia street sprite, friendly NPCs that sell you tools, food, and other necessities.

I have the base area laid out (though I still need to do some reshaping), but I'm hoping items from the mush series, as well as other natural theme items, will help sell the vibe. It's a shame I can't drop mushrooms on a wild log bench.

Named for the real world Ilmensky Mountains, which are known for their precious and semiprecious stones, Ilmenskie is a region within a region... or rather, two regions underneath a third! The street in Uralia named Ilmenskie connects to Ilmenskie Caverns (as does another street, Eastern Approach), and at the lowest points of the Caverns, you enter Ilmenskie Deeps. They maintain some whimsical elements of Uralia, but with toned-down, stony decor more befitting a mine. Ilmenskie is a great place to mine rocks, which is energy-intensive, so the Meal Vendor (a mushroom fellow with a little cart) hangs around to sell energy-rich full meals.

This is the oldest structure placement on my island, not counting Resident Services. I realized I couldn't dig into the earth, but it might give the appearance of such if I built up the surrounding area in a ring. I planned out the structure on graph paper after flattening my island and spent like a week covering Uralia in mannequins to channel the rock spawns into my chosen area.

I have decorative stones and amber (one of the gems a player could rarely mine from a rock in Glitch) acting as decorations and backstops for digging. I plan to add more variation to the taller cliffs and backdrop, as well as a "meal vendor". If you notice a Western-style stone, it's because when your energy hits zero in Glitch, you die, and that exact spot is marked with a gravestone that people can leave flowers on. This also serves as a respawn point. Since mining takes a lot of energy, it wasn't rare to see a grave or two in the Deeps.

Fun fact: in real life, mining in Ilmensky is now illegal, as it's within a nature preserve.

This area is also called the Firebog, because the four regions of Mazza'la were inspired by peat bogs and are also very lightly on fire. They have different available resources than the rest of the map, including jellisacs (these jello grape-looking things), barnacles, and the aforementioned peat. Fireflies also live in the Firebog, of course.

A combination of the Festivale, Halloween, and bamboo series makes up most of the earthy, firey furniture aesthetic.

Roughly pronounced JAY-tee-mahd. Named for the root of the Glycyrrhiza glabra plant, AKA licorice. This is both a map region and home to Jethimadh Tower, a quest building I thought would be best represented by the Uralia Museum, which I nestled into a cliff and topped with pagodas.

This is a quest area that really stuck with me, which is fitting given its theme of slowing down and remembering the small moments. I have it behind Resident Services at the moment, because a raised area behind the plaza increases visibility of the ground. It's also useful for watching fireworks!

I plan to represent Andra with an area around Resident Services because Andra was home to a building conveniently called the "Bureau of Administrative Affairs Ministry of Departments," an aggressively bland building you'd have to wait in for a few quests. If you think Isabelle takes a while to get to the point, hoo boy.

I don't plan on representing the bureaucrats themselves, though, because their lizardy designs make me feel weird now that I'm older and know the disturbing implications of representing authorities as lizard-like. I don't think that was what they meant, but still...

Death in Glitch isn't the end of your game. Hell itself is a region to explore, and after serving your time, you can resurrect and return to the world of the living. There are even a few resources to be found in Naraka, like tomatoes[note 2] and the ultra-rare Wine of the Dead, which can restore anything to life, or kill anything living.

It also houses Hell's Bartender, who has a very fun character design.